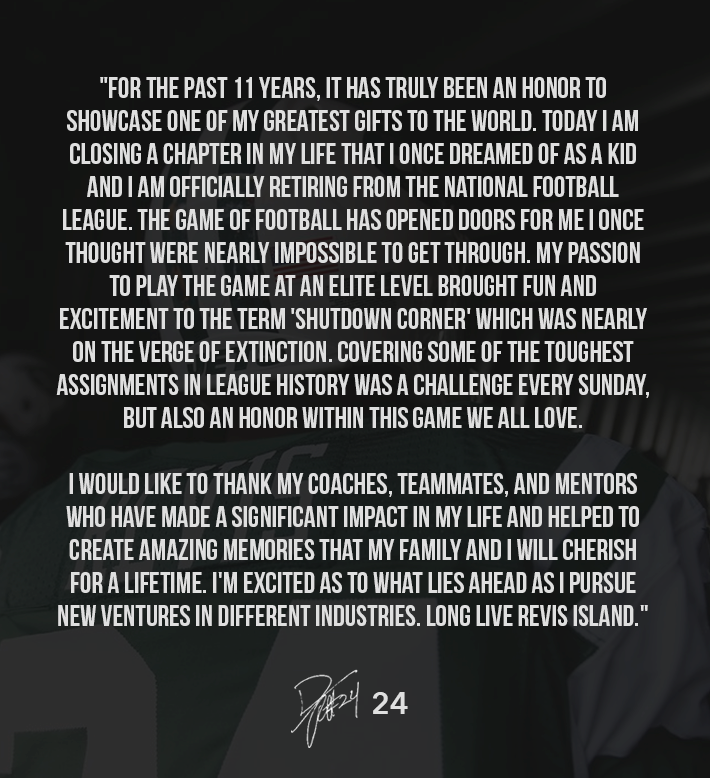 NEW YORK, July 18, 2018 — Darrelle Revis, 7-time Pro Bowler, NFL Champion, one of the greatest cornerbacks in NFL history, and indisputably one of the most beloved players in the existence of the JETS franchise, has announced his retirement this morning via his social media accounts, reports The Ribbit Group.

Early in his career, Revis earned the reputation as a preeminent lockdown cornerback, a difficult, yet highly coveted position to play. The 4-time All-Pro coined the term “Revis Island” for his ability to shut down receivers. A game changer on and off the field, Revis became the NFL’s savviest negotiator with career earnings topping 124 million dollars making him one of the highest-earning cornerbacks ever.

“For the past 11 years, it has truly been an honor to showcase one of my greatest gifts to the world. Today I am closing a chapter in my life that I once dreamed of as a kid and I am officially retiring from the National Football League. The game of football has opened doors for me I once thought were nearly impossible to get through. My passion to play the game at an elite level brought fun and excitement to the term ‘shutdown corner’ which was nearly on the verge of extinction. Covering some of the toughest assignments in league history was a challenge every Sunday, but also an honor within this game we all love.

I would like to thank my coaches, teammates, and mentors who have made a significant impact in my life and helped to create amazing memories that my family and I will cherish for a lifetime. I’m excited as to what lies ahead as I pursue new ventures in different industries. Long live Revis Island.”